Cold War Veterans of all service branches have interesting stories such as:

(^Click^ the red title above to read the article.)

“The Cold War was waged to stop the spread of communism. Communism (in a nutshell) required (1) abolition of religion; (2) government ownership of communication, transportation, factories, agriculture; and (3) government control of labor and education. Communism resulted in bloody purges, lethal labor camps, and the cold-blooded murder of multiple millions of innocent people. Lasting from about 1945 to 1991, many experts refer to the Cold War as World War III. It was global, with many facets and changing strategic considerations. During some parts of the period, actual shooting wars were involved, but always it was a political and military confrontation. Many of the personnel losses in the Cold War were on missions that were under the veil of secrecy because it involved various shades of warfare--conventional and unconventional; open and in the shadows.”
(Adapted from various Internet sources.)

An April 14, 1950 National Security Council Report to the President (“United States Objectives and Programs for National Security”) stated “A program for rapidly building up strength and improving political and economic conditions will place heavy demands on our courage and intelligence; it will be costly; it will be dangerous. But half-measures will be more costly and more dangerous, for they will be inadequate to prevent and may actually invite war. Budgetary considerations will need to be subordinated to the stark fact that our very independence as a nation may be at stake.
(https://fas.org/irp/offdocs/nsc-hst/nsc-68-9.htm)

The report concluded that “The whole success of the proposed program hangs ultimately on recognition by this Government, the American people, and all free peoples, that the Cold War is in fact a real war in which the survival of the free world is at stake.”
(https://fas.org/irp/offdocs/nsc-hst/nsc-68-cr.htm)

Vietnam and Korea were major parts of the Cold War.

“On June 25, 1950, the Korean War began when some 75,000 soldiers from the North Korean People’s Army poured across the 38th parallel, the boundary between the Soviet-backed Democratic People’s Republic of Korea to the north and the pro-Western Republic of Korea to the south. This invasion was the first military action of the Cold War.”
(https://www.history.com/topics/korea/korean-war#section_2)

“For we are opposed around the world by a monolithic and ruthless conspiracy that relies primarily on covert means for expanding its sphere of influence — on infiltration instead of invasion, on subversion instead of elections, on intimidation instead of free choice, on guerrillas by night instead of armies by day. It is a system which has conscripted vast human and material resources into the building of a tightly knit, highly efficient machine that combines military, diplomatic, intelligence, economic, scientific and political operations. Its preparations are concealed, not published. Its mistakes are buried, not headlined. Its dissenters are silenced not praised. No expenditure is questioned, no rumor is printed, no secret is revealed. It conducts the Cold War, in short, with a war-time discipline no democracy would ever hope or wish to match.”
President John F. Kennedy 27 April, 1961
(https://www.jfklibrary.org/archives/other-resources/john-f-kennedy-speeches/american-newspaper-publishers-association-19610427)

In his first State of the Union speech President Dwight Eisenhower said, “There is but one sure way to avoid total war--and that is to win the Cold War.”
(https://www.eisenhowerlibrary.gov/sites/default/files/file/1953_state_of_the_union.pdf)

The Cold War is considered one of the most important historical events in world history. It spawned many things from infrastructure to spy novels, such as James Bond, the space race and more…The term Cold War came from Bernard Baruch, an adviser to presidents from Woodrow Wilson to Harry S. Truman. He coined the term to describe the “chilly” relations between the United States and the Soviet Union. It was a state of conflict between the nations that did not involve direct military action, but was pursued through economic and political actions, propaganda, espionage and proxy wars. Despite the term Cold War, there were still soldiers on the front lines…The cold war was the longest war in United States history. Because of the nuclear capabilities of our enemy it was the most dangerous conflict our country ever faced. Those that won this war did so in obscurity. Those that gave their lives in the Cold War have never been properly honored.”
(https://www.inhnews.com/coldwarvets)

The Cold War was “a war. The Cold War is sometimes referred to as World War III, which is apt. At its quietest moments, the Cold War was warm…It was global. The Cold War was not just about parts of Europe and Asia--every region of the world was involved. The conflict was usually central to politics, diplomacy, and trade. No matter the issue, it was impossible to escape the Cold War… It was a battle of ideologies in every possible realm--political, economic, moral, and spiritual. But there was no equivalence between the two sides. The Cold War was a conflict between good and evil, freedom and tyranny, liberal democracy and totalitarianism, capitalism and communism, theism and atheism.”
(https://townhall.com/columnists/leeedwards/2016/02/29/10-reasons-why-the-cold-war-matters-n2125407)

“The Cold War, which lasted 50 years, was the longest war in United States history, and the most expensive, costing trillions of dollars. At its conclusion, America emerged as the only remaining superpower in the world. Because we faced an enemy with tremendous nuclear capabilities, it was the most dangerous conflict our country ever faced. The threat of mass destruction left a permanent mark on American life and politics. Those that won this war did so in obscurity…(There are) thousands of stories of men and women who worked in secret to bring us safely through the Cold War conflict. Our nation needs to recognize the veterans of the longest war in United States history--a battle which also had the highest stakes.”   Harry Reid, U.S. Senator
(https://www.govinfo.gov/content/pkg/CHRG-108shrg88040/html/CHRG-108shrg88040.htm)

After Ronald Reagan became president he put in place policies that put pressure on the Soviet Union and said, “Here’s my strategy on the Cold War – we win, they lose.”
(Ronald Reagan, June 1988 http://61538490.weebly.com/ronald-reagan-and-the-evil-empire.html)

“But the biggest thing that has happened in the world in my life, in our lives, is this: By the grace of God, America won the Cold War.”—President George H.W. Bush, State of the Union address, January 28, 1992.
(https://www.cfr.org/blog/history-cold-war-40-quotes)

"And so the greatest of American triumphs... became a peculiarly joyless victory. We had won the Cold War, but there would be no parades." Robert M. Gates, 1996
(https://www.azquotes.com/quote/934297))

Cold War veterans seek due recognition for their service

“They may have served in the U.S. military overseas or at a missile base in America. They may have been on secret missions in submarines, in aircraft or on the ground. They are millions of Cold War veterans, who served in the military from September 1945 to Dec. 26, 1991 — the day the Soviet Union dissolved — during pockets of peacetime tension that came during the expansion of communism and the fall of the Berlin Wall.

“Frank Tims, historian and past chairman of the American Cold War Veterans, said a medal or a memorial would 'at least get some formal recognition that the Cold War was more than just a period of unpleasantness and that the Defense Department has never owned up to recognizing it.'

“Supporters say there are small memorials around the country for Cold War veterans, but they think there should be one in Washington, D.C., which is home to numerous other memorials, such as for World War II and the Vietnam War.

“There has been federal legislation for a Cold War service medal, but the Defense Department, some veterans said, has stymied the idea in prior years.

“A Cold War recognition certificate (see below), established in 1999, is available for service members and civilian workers, according to the Defense Department. There also are commemorative medals sold by private vendors, but they cannot be worn on military uniforms, the department has said.”
(https://www.usatoday.com/story/news/nation/2014/11/11/cold-war-vets-seek-recognition/18839955/)

In the House of Representatives, U. S.,

Whereas the Cold War involved hundreds of military exercises and operations that occurred between September 2, 1945, and December 26, 1991;

Whereas millions of Americans valiantly stood watch as members of the Armed Forces during the Cold War; and

Whereas many Americans sacrificed their lives during the Cold War in the cause of defeating communism and promoting world peace and stability: Now, therefore, be it

Resolved, That the House of Representatives--

(1) honors the sacrifices and contributions made by members of the Armed Forces during the Cold War; and

(2) encourages the people of the United States to participate in local and national activities honoring the sacrifices and contributions of those individuals.

COLD WAR VETERANS ARE STILL WAITING FOR THE BILL TO REACH THE PRESIDENT.

“President Barack Obama once promised, as a U.S. Senator, to honor veterans of the Cold War, who have never received official recognition and are therefore prevented from full participation in many Veterans Day celebrations. But he never fulfilled that promise--neither in the Senate nor the White House--leaving Cold War veterans in the cold.

“The U.S. has thus far failed to honor those who served in the long struggle against communism, which began almost as soon as the Second World War had ended. Though communist regimes--especially Stalin's Soviet Union and Mao's China, and satellites such as Pol Pot's Cambodia--committed more murders than the Nazis, few Americans are aware of the absolute moral evil that communism represents, or the sacrifices made to stop it.

“The U-2 pilots who provided essential intelligence; the soldiers who kept watch in Berlin; the sailors who were silent sentinels aboard submarines, tracking Soviet movements, ready to strike--all have gone unheralded, and largely uncelebrated, even on Veterans Day.

“It is possible that the reluctance to honor Cold War veterans springs from a political motive. Many on the left opposed the tough line taken against communism... They won the longest and most important war of our nation's history, freeing millions from totalitarianism. But the nation they served has yet to commend them--and the president has, disgracefully, failed to honor his promise.”
(http://www.breitbart.com/Big-Government/2012/11/11/Disgrace-Barack-Obama-Broke-Promise-to-Honor-Cold-War-Veterans)

“When many of our Cold War veterans returned from their service, they went back to their families, jobs and lives without public fanfare. Freedom is passed down from one generation to the next by the American patriots who are willing to stand between a threat and our civilian population. It is long overdue that our Cold War veterans receive the respect and recognition of our grateful nation.”
(http://www.americancoldwarvets.org/Cold-War-Veterans-Recognition-Day-H.Res.900 NOTE: website is no longer active) 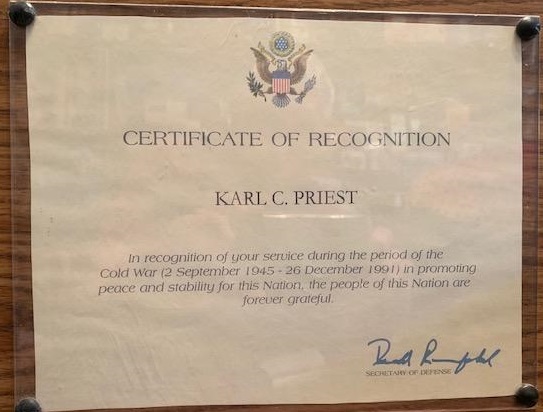 Under the 1998 National Defense Authorization Act, the Secretary of Defense approved awarding Cold War Recognition Certificates to all members of the armed forces and qualified federal government civilian personnel who faithfully and honorably served the United States anytime during the Cold War era, which is defined as Sept. 2, 1945 to Dec. 26, 1991.
(https://historyhub.history.gov/docs/DOC-1094)

There are Cold War Veteran items available on Amazon.

You can see interesting YouTube videos by searching for “Cold War,” “Continuity of Government (COG),” “Cold War bunkers,” “MAD,” etc. You can actually see the USS Wright’s sister ship, the USS Northampton, from 5:55 to 6:47 in THE ANSWER TO THE PRESIDENTS CALL: Military Cold War Exercises in the 1960’s (Part I).

“Why is anarchy so attractive to Gen Z and millennials?...Unlike older generations, this age group didn’t live through the Cold War, where every American was acutely aware of the realities of communism…”
(https://clarionproject.org/americans-brace-for-election-violence/)

“The Left reached its hand out in solidarity to the communist enemy in the Cold War. Now it is doing the same thing in our terror war, but this time the totalitarian adversary that garners the Left's veneration and devotion is Radical Islam. The Left is always engaged in a pathological romance with our despotic enemies who wish us harm.”
(https://www.worldviewweekend.com/news/article/showdown-evil-our-struggle-against-tyranny-and-terror)

I volunteered for Vietnam duty, but Uncle Sam had other plans (God’s perfect plan). Besides being a Cold War veteran, I am a Vietnam Era vet.

Both the Wright and the Northampton had a huge dish-like structure used for Troposphere Scatter Communications called a Tropo tower. Troposcatter allows microwave communication beyond the horizon. 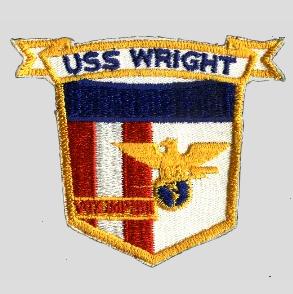 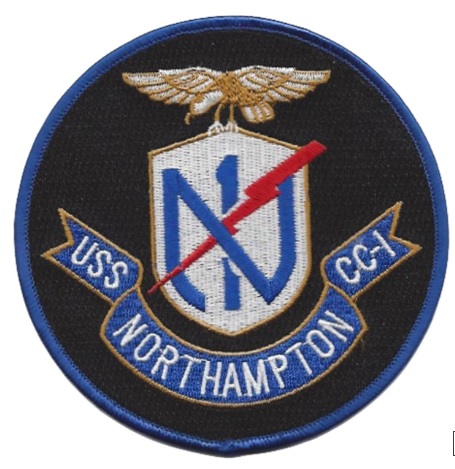 For questions, email:
coldwarvet68 [at] aol.com